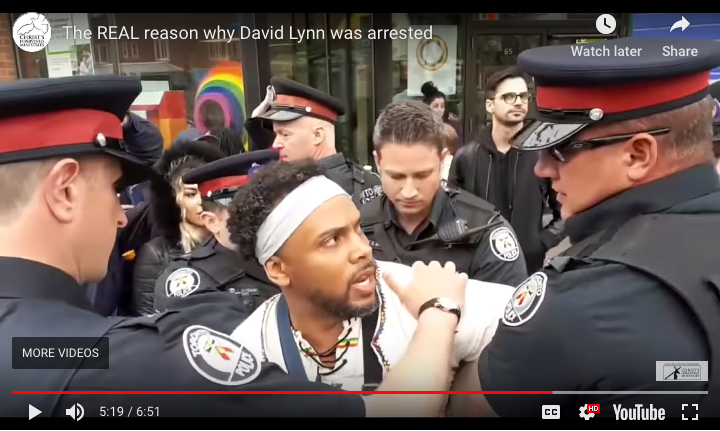 This week (July 10) pastor David Lynn appeared in court for the second time. In early June, pastor Lynn of Christ’s Forgiveness Ministries was arrested and charged with “causing a disturbance” (section 175 of the Criminal Code), held in jail overnight, and released on bail the next morning. His crime: preaching the gospel on the corner of Church and Wellesley.

The Toronto Police explained in a news release at the time (image of the release copied below) that pastor Lynn’s message was “causing alarm” in the community (the Church and Wellesley community is well-known as the “gay district” of the city) and that his preaching “attracted a large hostile crowd”.

Now, I’ll be honest: the first time I read about this, I thought to myself, “Here we go again. Another person who calls himself a Christian ranting belligerently about homosexuality.” But then I watched the entire live-streamed video of the event and discovered that pastor Lynn’s message was focused on God’s love and forgiveness for all who turn to him, and not about sexuality or sexual conduct. You can view a 7-minute condensed video of his encounter here, or watch the entire live-stream of the event, but I’ll summarize it for you below.

A play-by-play of the arrest on June 4

06:20 – 12:30 – pastor Lynn and a small group pray, asking for God’s help, thanking God for his grace and love, for freedom, and asking for a blessing on their sharing of the news that God so loved the world he gave his only Son, that whoever believes in him should not perish but have everlasting life (John 3:16). They then recite the Lord’s Prayer three times. During their prayers, a small crowd of onlookers begins to gather.

12:30 – 34:00 – pastor Lynn begins to preach on love, telling a growing crowd that God loves them. He asks the crowd, which almost immediately starts interrupting him, whether they would tolerate him as a Christian. His message: all of us are sinners in need of grace, Jesus died for sinners, and Christians love and accept all people and want them to know Jesus and his love. As he preaches, the crowd grows in number and hostility, with some shouting and blocking pastor Lynn’s movement. Pastor Lynn asks, “Will your love accept Christians?”

34:00 – 40:15 – Sergeant Dyck of the Toronto Police appears on the scene. He immediately tells the pastor to turn off his microphone. Sgt Dyck tells pastor Lynn that he is causing a disturbance. Pastor Lynn points out that he’s just preaching good news, and that it is members of the crowd who are causing the disturbance.

40:15 – 46:00 – Pastor Lynn agrees to turn off the microphone but continues to preach without it. A man in the crowd starts chanting, “Loves conquers hate”, and pastor Lynn and his supporters join right in. Pastor Lynn is asked (at 41:46) why he’s preaching. Pastor Lynn responds, “My purpose is to share my message that God loves you.” To which an off-camera person shouts, “Yeah, which is hatred. Hatred, friend, hatred.”

46:00 – 48:00 – Another 5 or 6 police officers arrive and suddenly arrest pastor Lynn. He asks why, and they tell him he is causing a disturbance. Lynn does not resist. He is escorted to a police car and placed in the back seat.

A “hostile crowd” gathered, the preacher is arrested

Global News reports that a large crowd gathered and yelled at Lynn. The police report confirms the same: Lynn’s preaching “attracted a large hostile crowd.” Note well: the crowd was yelling and hostile (as the police themselves admit), not the preacher. Yet the police never tell the crowd to disperse. The police never ask the protesters to move along or to stop shouting or blocking traffic. Instead, the preacher gets arrested – to the loud cheering of the crowd. And pastor Lynn is not simply taken away for his own protection. No, he’s criminally charged and held in jail overnight, made to appear before a bail court the next morning, and then released with a new court date in July.

This whole episode reminds me of the sit-ins that people would do to protest racial segregation laws, where the police would arrest black people for causing a disturbance, even though the ones causing the disturbance were the white agitators.

The police blame the preacher. The man who is being yelled at and whose movement is intentionally blocked is arrested. This whole episode reminds me of the sit-ins that people would do to protest racial segregation laws, where the police would arrest black people for causing a disturbance, even though the ones causing the disturbance were the white agitators. Martin Luther King Jr.’s Letter from a Birmingham Jail details these shameful police tactics.

This episode also reminds me of the preaching of the gospel by the Apostle Paul in places like Ephesus and Corinth where his preaching provokes riots and the civil authorities blame Paul. The State is mandated, however, to ensure justice and uphold the law. In Canada, where we have a constitutionally guaranteed freedom of (peaceful) expression (see the Charter of Rights and Freedoms, section 2(b)) this should mean that police break up or manage the “large hostile crowd”, not arrest the preacher.

Now, perhaps there is a judgement call to be made by law enforcement: if the crowd is large and hostile and there seems to be a risk of violence and too few officers to prevent it, then there may be good reason to simply remove the preacher. I can understand that. In this particular case, my opinion is that there were enough police and the crowd was small enough that the police could have disbursed the crowd, but I can respect that police must make a judgment call at the scene. However, it is baffling why they criminally charge him. The Crown prosecutor’s decision to pursue a conviction, rather than drop the charges, is more baffling still.

A “heckler’s veto” occurs when protesters succeed in silencing someone, whether by pressuring a town to revoke a permit for an event, or a university to cancel a speaker, to give just two examples. In pastor Lynn’s case, we have a heckler’s veto with handcuffs. The police not only allow the crowd to “veto” pastor Lynn’s freedom to share the gospel with people on the street, but throw in handcuffs, jail time, and criminal charges too.

In 1967, Pierre Trudeau, defending his government’s move to decriminalize homosexuality, famously said, “There’s no place for the state in the bedrooms of the nation”. Most people don’t know what he said next: “When it becomes public, this is a different matter.”

A double standard for law breakers

Equally disturbing is the police’s double standard in enforcing the law in this neighbourhood. Pastor Lynn was preaching in the “gay district” of Toronto at the beginning of Pride Month. Soon after was the Pride Parade, a supposedly family-friendly event notorious for lewd displays of nudity and sexual innuendo. In 1967, Pierre Trudeau, defending his government’s move to decriminalize homosexuality, famously said, “There’s no place for the state in the bedrooms of the nation”. Most people don’t know what he said next: “When it becomes public, this is a different matter.”

The Criminal Code of Canada has clear prohibitions on this kind of behaviour, banning indecent acts (section 173) and public nudity (section 174). For example, the Code states at s. 174(1)(a) “Every one who, without lawful excuse, (a) is nude in a public place, is guilty of an offense”. Yet this goes unenforced during the Parade. The very next section (175), containing the much more vague offence of “causing a disturbance,” is the section pastor Lynn has been charged under.

The Global News story on David Lynn’s arrest states that “Mayor Tory responded to news of the incident… by stating that free speech has its limits”. One protester called the message of the gospel “hate”. A police officer tells pastor Lynn that he is causing a disturbance, even though the officer is surrounded by other people holding signs, shouting, and blocking the street.

This is concerning, particularly because of the very little information that any of these three groups (politicians, police and protesters) were reacting to. Was this a knee-jerk reaction, based on stereotyping, against a Christian with a microphone? Early news reports and police statements claimed the pastor was shouting homophobic slurs, a baseless accusation quite obviously disproved by the video.

Paul explains that the gospel is offensive to some, apparently even the basic message that God loves you. And Jesus says that, if they hated me, they will hate you. So, be thankful and encouraged that Christians in Canada do continue to share the gospel . . ..”

The failure of the crowd to ever engage pastor Lynn on his question: “Can you accept me as a Christian?” and their virulent opposition to Lynn’s simple message shows that there is something deeper going on here.

But this should not surprise us as Christians. Paul explains that the gospel is offensive to some, apparently even the basic message that God loves you. And Jesus says that, if they hated me, they will hate you. So, be thankful and encouraged that Christians in Canada do continue to share the gospel, even in the Church and Wellesley area of Toronto. And note well that Canada is a prime mission field in urgent need of the full message of the gospel! Maybe we have something to learn from David Lynn.

To read the Toronto Police Service’s news release for yourself, see below. 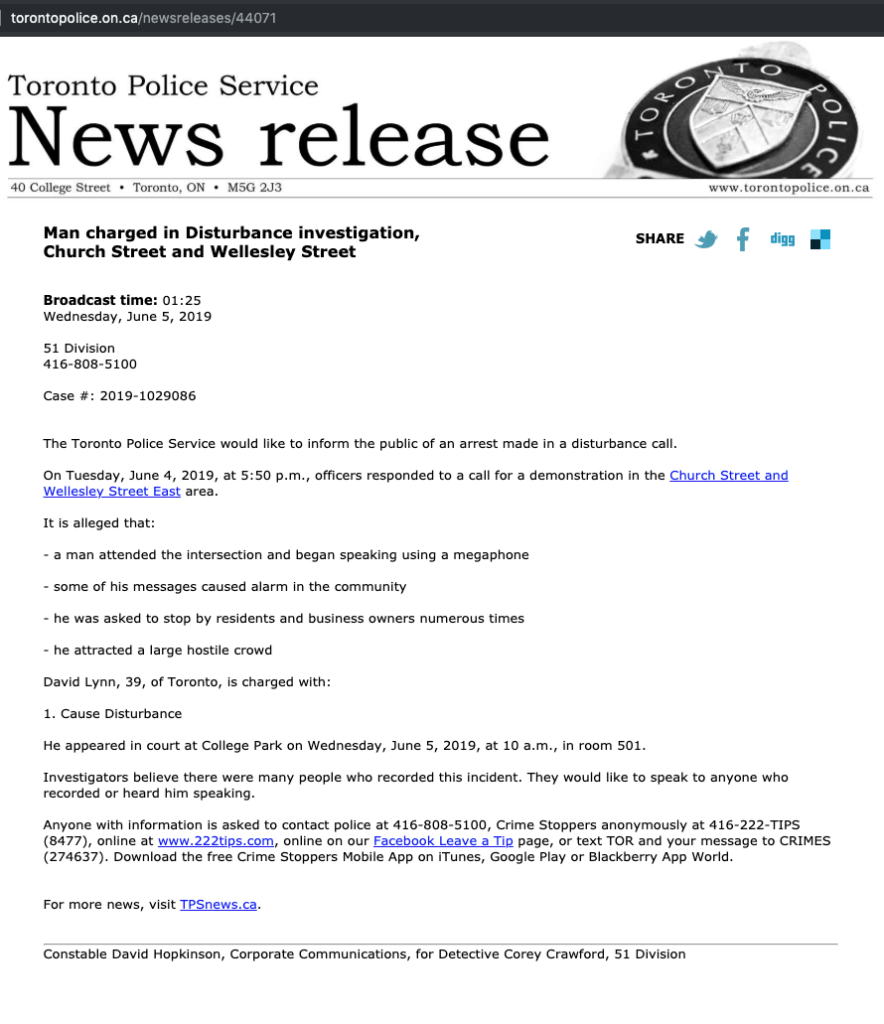 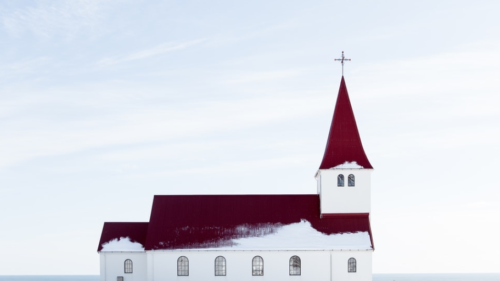 LN Feature: Christians: Your Voice Can Make a Difference in the Political Landscape