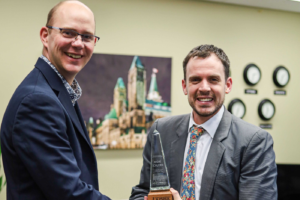 Photo: Mark Penninga, executive director of ARPA Canada, presents a plaque to André Schutten on the occasion of his 10 years with ARPA.

I started my first day with ARPA Canada as Ontario Director and Legal Counsel on June 22, 2011. My office was a single room on the upper floor of an art gallery, managed by my wife Karyn, nestled in the picturesque hills of Gatineau Park. The day before I started, I was called to the bar, officially becoming a fully licensed lawyer. One of my first orders of business was to set up my office, complete with a timber and brick makeshift bookshelf (my book collection has grown considerably since then, and yet… there are so many more books to read!) And I introduced myself to the ARPA support community by video (boy, the quality of our videos has sure increased!).

It is not good for man to be alone. That is as true of work as it is for marriage, family, and church community. From day one at ARPA, I had a friend in my colleague Mark Penninga, a man who is servant-hearted to the extreme and exudes humility in service. He is also remarkably patient and has endured many hair-brained ideas and antics from me over the years. Less than a year after I was hired, Mike Schouten joined the ARPA team, and the three of us have been able to pull and work together despite being physically apart for most of the time. The team has since grown to 16 staff, all of whom are friends and wonderful brothers and sisters in the Lord and are a delight to work with.

I have also experienced the overwhelming support of family over the past 10 years, and in particular, my wife Karyn. She very patiently endured many nights alone while I worked late or travelled for court appearances or speaking engagements all over the country. This became all the more difficult as God entrusted children to our care. I am a recovering workaholic, and Karyn has been faithfully reminding me to not find my identity, worth, or meaning in my work, but to work for the Lord, resting in my identity in Him. My parents have also been very supportive, always attending any ARPA presentations in southern Ontario, following ARPA’s work very closely, and happily hosting me and other ARPA staff whenever we were in the area. My siblings and in-laws have also been a wonderful support.

The LORD has also blessed me with the encouragements of the broader Reformed Christian community. My local church and small group in Ottawa are a wonderful blessing, and hearing words of encouragement, prayers of support, cards of thanks from supporters all across the country is incredibly uplifting. I work alongside other like-minded and like-missioned organizations here in Ottawa, and I can honestly say that the level of personal connection and support coming out of ARPA’s constituency is unparalleled by any other Christian advocacy organization. Relative to the size of our constituency, ARPA Canada is punching well above its weight. I am proud and thankful of that fact, recognizing God’s hand through it all.

The LORD has opened the door to many opportunities that I never imagined that first day of work a decade ago. Through the spirit of generosity in our supporters, I have had many memorable opportunities. These would not have been possible without the financial and spiritual support of the Reformed Christian community.

Less than three years after I started, ARPA decided to apply to intervene in the Supreme Court of Canada in the Loyola case as the organizing party of a coalition of over 300 Christian schools from across the country. Sitting in the Supreme Court (beside fellow lawyer Ian Moes) as counsel for ARPA and the coalition of Christian educators was pretty surreal. Later that year, ARPA was back in court, this time in the Carter case, to defend Canada’s prohibition on assisted suicide and euthanasia as a necessary law that protects the most vulnerable. This intervention opened many doors to Parliamentary consultations on the same issue. A particular highlight was presenting to the Justice Committee on Bill C-14 alongside Pieter Harsevoort and James Schutten, urging the committee to consider the perspective of those most vulnerable as they created and then changed Canada’s euthanasia laws.

Another highlight was the campaign to save the special protections for worship services in the Criminal Code. In 2017, Bill C-51 sought to delete section 176 of the Criminal Code and the specific protection it gave around interrupting worship services, but a campaign by ARPA and many other religious communities rallied to keep the section. I had the pleasure of watching the Justice Committee vote to keep the section and was overjoyed to share an update by video as I walked out of the House of Commons. Later that same year I had the incredible honour of making oral arguments in the Supreme Court of Canada in the TWU case.

The LORD has given me so many other opportunities, including writing academic articles for law journals, completing a Masters in constitutional law, presenting on a dozen fall tours and at numerous God & Government conferences, speaking at other events for our friends at the Christian Legal Fellowship or at the Ezra Institute, and so much more. And all of these opportunities are possible because there are other colleagues and friends working quietly behind the scenes playing a supportive role to me as well.

Thankful that the future is in good hands

At the time of writing, the last year has had its share of disappointments. The only ruling from a court on the total prohibition on corporate (in-person) worship was decided against churches (though an appeal and other cases are in the works). Bill C-7 – a radical expansion of assisted suicide – passed into law despite an unprecedented, coordinated push against the bill from groups across the political spectrum. Bill C-6, proposing to ban conversion therapy but capturing so much more than that, passed the House of Commons yesterday. Bill C-10 passed the day before, potentially infringing dramatically on freedom of expression online.

It’s enough to make one despair. Except…

Except that, as my friend and colleague Mike Schouten likes to say, while we might not know what the future holds, we know Who holds the future. We have a good God who, in his providence and wisdom, brings us adversity or plenty for our good. And there have been wins as well. As discussed with my friend and former colleague John Sikkema, the unanimous win in the Supreme Court of Canada this spring on the independence of the church to determine questions of doctrine and church membership means that the church is still free to preach the gospel – the whole gospel for the whole person – and to exercise church discipline without interference from the state. May the church make full use of that freedom while she has it!

So, after spending a decade with ARPA Canada, I can say that our God moves mountains! And looking forward to whatever God has in store for us, I am confident in His provision and care. Praise God from whom all blessings flow!