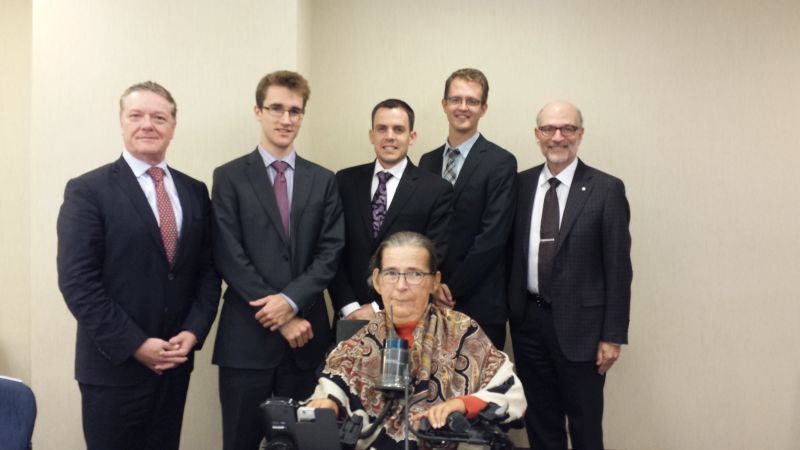 ARPA Canada was able to present to the Panel on Options for a Legislative Response to Carter v. Canada. ARPA’s legal counsel André Schutten and policy analyst Colin Postma were joined by lawyer John Sikkema. They presented three options: draft legislation using Section 33 of the Charter of Rights and Freedoms (the “notwithstanding clause”), some recommendations on mitigating the harm of assisted suicide, and ARPA Canada’s ‘third option’ of amending the Criminal Code to specifically address assisted suicide and euthanasia.

André Schutten began his presentation with a story of a close relative who has been in a wheelchair most of his life, who has been in and out of the hospital many times. During such hospital stays, his family has been asked, “is it worth it?” by some in the health care profession. If this kind of pressure exists to undermine the value of life for those with disabilities before any Parliamentary action on Carter, how much more afterwards. Those with disabilities will be forced to prove their worth to society, or be shamed and undervalued, Schutten said. He then presented ARPA’s draft law for using Section 33 of the Charter, the so-called ‘notwithstanding clause’ and advised the panel that it is ARPA’s position that this is the best legislative option for protecting the value of life for the most vulnerable.

John Sikkema then discussed the proposal in Protecting Life: How Parliament can Fully Ban Assisted Suicide Without Section 33 – a document ARPA retained him to produce over the summer. Essentially, this paper argues that Parliament can, and should, maintain the Criminal Code prohibition of assisted suicide and euthanasia, by adding an explicit purpose clause to make clear that the purpose of an absolute prohibition is very different than the Supreme Court thought it was. By so doing, Parliament would render the Supreme Court’s decision inapplicable. Sikkema took a number of questions from the panel including the question of whether assisted suicide and euthanasia can be considered both morally and legally wrong if the court struck down the provision. He also answered questions relating to the jurisdiction of the provinces over the regulation of assisted suicide and euthanasia. Sikkema was able to point out that assisting suicide or providing euthanasia is not ‘health care’ as such but is simply to be facilitated by health care practitioners and that as such it should continue to be regulated under the criminal code, which is federal jurisdiction. He further pointed out that the Supreme Court looked to Parliament to enact a law, and thus no action on their part would be to disregard the court’s recommendations.

Schutten followed up by presenting the restrictions ARPA Canada would advise for assisted suicide and euthanasia legislation if it was politically impossible to entirely ban the practice. Stemming the Tide: How Parliament must mitigate the harm of assisted suicide, is a document produced by Sikkema, and edited by Schutten and ARPA’s Executive Director Mark Penninga this summer. Schutten advised that this approach is the least desirable option of the three ARPA has proposed. However, should the new government insist on legalizing assisted suicide, then the restrictions ARPA proposes are absolutely necessary to mitigate the harm of the practice. Some of the recommended restrictions mentioned during the presentation: that the preamble of the legislation clarify that assisted suicide is not medical care, that there be a judicial review of the legislation every three years to ensure it is not being abused, that there be a psychological counselling referral for every patient requesting assisted suicide, that there be judicial oversight of the patient’s consent including notice to immediate family members of judicial application, that the process be witnessed and audio and video recorded to ensure consent, and that sessions are required with independent palliative care specialists to provide end of life care to reduce the desire for assisted suicide. Both Schutten and Sikkema fielded a number of questions about these recommendations during the hour-long session. Schutten was able to then clarify again that ARPA Canada prefers one of the other two options proposed, that of Section 33, or amending the Criminal Code to absolutely prohibit euthanasia and assisted suicide.

Overall, Schutten and Sikkema felt the presentation went well. At this point it is unknown how the new Liberal government will respond to the proposals of this panel.

WHAT CAN YOU DO?