In the past number of months, ARPA Canada has met with dozens of lawmakers to discuss our concerns with Bill C-6, An Act to Amend the Criminal Code (conversion therapy). At numerous times during those meetings, I outlined a fictitious scenario to make this more real. The scenario went like this:

“Imagine that I have a 9-year-old son and he recently came home from school expressing that he thought he was a girl trapped in a boy’s body. He wants to go to school in girls’ clothes. Rather than affirm his thoughts, I told him that God had made him a boy and that, although his feelings he had were not uncommon, his mother and I would continue expressing our love for him as our son. A few weeks went by and he again expressed similar thoughts. We assured him that he was a boy, our son, and asked if he wanted to go and see the Pastor to chat about it some more.”

At this point, I would ask the lawmaker if Bill C-6 (when passed into law) would criminalize my actions. The responses varied depending on who we were meeting with, but they ranged from, “I certainly hope not!” to “Well, I’m not sure, but what you’ve outlined sounds like child abuse.”

This varied response was also reflected in a recent national survey conducted by Nanos Research for the Justice Centre for Constitutional Freedoms. The survey covered a number of aspects of counselling regarding sexuality (for both adults and children). 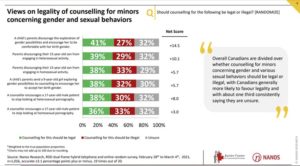 From a Christian worldview perspective, it is disheartening that so few Canadians support counselling for questions about gender and sexuality. Yet, as you can see from this slide, there are still slightly more Canadians who believe that these forms of counselling for minors should remain legal, and the fact that one third are unsure should certainly be a reason to be cautious about prohibiting this counselling entirely.

The survey also asked participants for their views regarding sexual counselling for consenting adults. As you can see from the slide below, the results for this question were much clearer – a strong majority of Canadians agree that consenting adults should be able to get this form of counselling, regardless of their gender identity or sexual orientation. 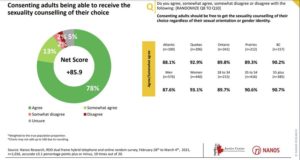 ARPA Canada believes that Bill C-6 is hugely problematic for a variety of reasons. We agree that conversion therapy, as properly defined, has no place in Canadian society. But this bill is so broad in its scope that it threatens to criminalize counselling that, as this Nanos survey show, Canadians either support or hesitate to regulate.

As Bill C-6 is scheduled to be debated again during the week of April 12th, please also know that in the coming weeks we will have numerous action items associated with it. You can find out more about this topic and these action items here.

May God graciously prevent our country from criminalizing counselling for children who are struggling with unbiblical desires or identities and for consenting adults seeking the counselling of their choice.

Mike Schouten is the Director of Advocacy for ARPA Canada