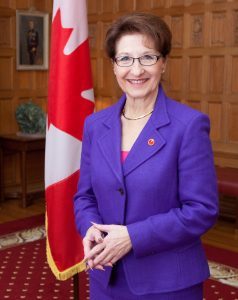 In Ottawa, the Senate debate on Bill C-16 is starting to wind down. This is the bill that would entrench protections for transgendered people into the Criminal Code and the Canada Human Rights Act by adding the terms “gender identity” and “gender expression” to the list of grounds upon which discrimination would be banned.

Alberta Senator Betty Unger tried to make an amendment to the Bill in earlier debate, which suggested that the idea of “gender identity” could not be separated from “gender expression.” She says people who are “expressing a trans persona would only do that if they truly felt they should.”

The amendment, she says, would ensure that we couldn’t have people claiming to be trans-gendered who really are not, and as such, it would have incorporated “protection for trans people, because it would have ensured that only genuine trans people should be allowed into gender-specific space(s)”, such as bathrooms or shower rooms. The amendment was defeated.

Unger says the bill also mandates the use of various pronouns on the gender spectrum, and imposes penalties on people who refuse to use those pronouns. That’s raised concerns about infringement on freedom of speech and freedom of conscience, including powerful testimony at the Senate committee hearing by experts like Dr. Jordan Peterson. “In seeking to protect rights,” Unger says, “this bill will endorse and impose a belief system that many Canadians just simply do not share.”

A final Senate vote on the bill is now expected by the end of this week.