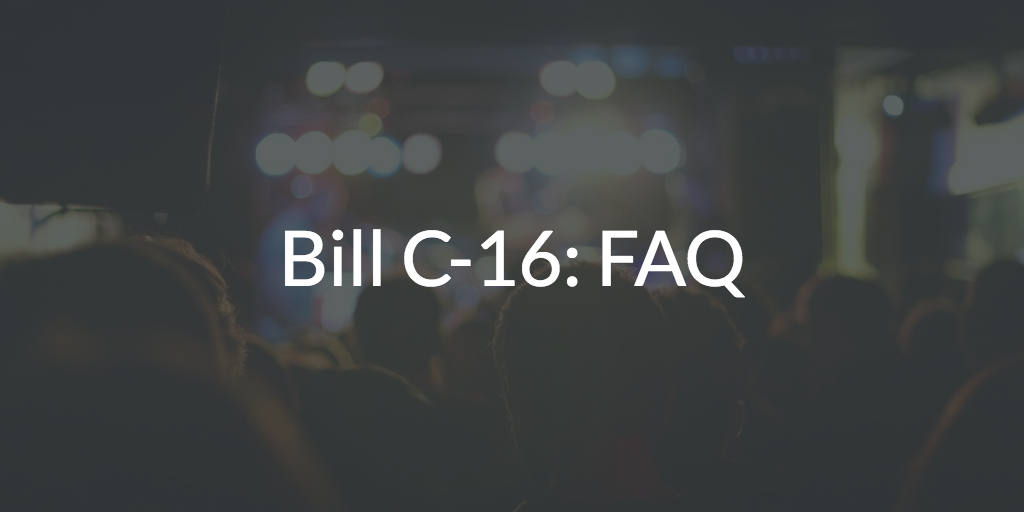 If you have not read ARPA’s main article on Bill C-16, we encourage you to read it first. There you will also find links to EasyMail letters on this topic. If you have already emailed your MPP, you can use this FAQ to assist you as you follow up with an additional email or phone call.

Why does the government say this bill is needed?

According to the speech by Justice Minister, Hon. Jody Wilson-Raybould, at the time she introduced C-16:

“The bill addresses a fundamental issue of equality and human rights, the discrimination and hate crimes experienced by trans and gender diverse Canadians… their life journeys are often more challenging, as they have to overcome misunderstandings, prejudice, and hostility because of their gender identity or expression. With the bill, we unequivocally say that Canada can do better… Bill C-16 reflects our commitment to this diversity and provides for equality and freedom from discrimination and violence for all Canadians, regardless of their gender identity. With the bill, we say loudly and clearly that it is time to move beyond mere tolerance of trans people. It is time for their full acceptance and inclusion in Canadian society.”

What stage is the bill at and how did it get there?

In late 2016, the bill sailed through the House of Commons with little discussion. The committee that was supposed to study it (the Standing Committee on Justice and Human Rights) rubber stamped it, not bothering to call witnesses to speak to it.

What is unlawful discrimination according to the Canadian Human Rights Act?

The Canadian Human Rights Act currently precludes discriminatory practices based on race, national or ethnic origin, colour, religion, age, sex, sexual orientation, marital status, family status, disability or conviction for an offence for which a pardon has been granted or a record suspension has been ordered.

Provincial human rights legislation applies to most services, employment, and housing providers, but the Canadian Human Rights Act applies to federally regulated entities like the military, shipping, aviation, and telecommunications.

What is “hate propaganda” according to the Criminal Code?

Public incitement of hatred means inciting hatred against any identifiable group by communicating statements in any public place where such incitement is likely to lead to a breach of the peace.

“Identifiable group” in the above offences means any segment of the public distinguished by colour, race, religion, national or ethnic origin, age, sex, sexual orientation, or mental or physical disability.

There is nothing necessarily wrong with prohibiting discrimination or prohibiting the promotion of hatred that targets a person’s identity. Canadians (particularly Christian Canadians) cannot tolerate truly hateful and harmful actions against other Canadians. The problem with Bill C-16 is that it enshrines into federal law a concept (gender identity) that, as predominantly understood today, is confused and harmful. (See ARPA Canada’s policy report for the medical evidence on this claim.)

No. We can protect all people against bullying, harassment, violence, and discrimination without embedding contentious, unscientific, “progressive” gender ideology in law.

The Code also prohibits advocating genocide, publicly inciting hatred, and willfully promoting hatred. However, these offences are all predicated on the victim group being an “identifiable group” listed in the Code.

They do not need to be. There are other groups of people we could think of against whom hatred or even genocide could be advocated. People who eat meat. Vegetarians. The wealthy. The poor. The homeless. Conservatives. Liberals. Marxists. Etc.

Instead of adding “gender identity or expression”, a better option may simply be to cut the list of “identifiable groups” and allow judges to determine contextually whether an identifiable group was being targeted.

Having a general “promoting hatred” offense (s. 319(2)) may be unwise, given that it is up to the state (the legislature and judges) to determine what constitutes hatred and what groups are protected against it. Promoting hatred with intent to cause a breach of the peace (s. 319(1)) is a more sensible offence. The same is true with regard to promoting genocide, since the prohibition is aimed at expression that directly promotes criminal actions.

No. The Canadian Human Rights Act prohibits discrimination on the basis of characteristics that define every human being, such as sex, age, race, and religion.

We all have a race, sex, age, and religion (even if we’re atheists or agnostics). But do we all also have a “gender identity” that might be different from our sex? This is what proponents of gender identity ideology believe. We disagree. Gender identity and expression has more to do with behaviour than innate characteristics.

Some say that religion is unlike the other “identifiers” listed in human rights legislation. In one sense, that is true. One’s religion and religious practices may be considered a “choice” in a way that one’s sex, age, or race plainly is not.

Canadian human rights law says people should not be discriminated against in receiving services, housing, or employment simply for being Christian, Muslim, agnostic, or whatever (leaving aside good faith religious requirements in hiring, such as hiring a pastor). However, one’s religious practices may raise legitimate concerns for, say, an employer, whose duty is then to reasonably accommodate.

The trouble with gender identity or expression is that it involves behaviours that may be rooted in a psychiatric disorder. How is an employer to accommodate such behaviour?

What may be considered illegal by a human rights tribunal goes far beyond what we would consider to be objectively mistreating people. According to the Ontario Human Rights Commission, illegal conduct could include:

This bill doesn’t harm you. Why are you concerned about C-16?

The bill does harm Canadians because it limits the fundamental freedoms of expression, religion, and association, without improving the lives of people who struggle with gender identity disorder. And it may cause certain risks to vulnerable groups, such as women in a women’s shelter.

Absolutely. Bill C-16 signals that the new “truth” is that gender is fluid and that a person’s fundamental human right includes the right to express a gender identity that is different than their biological sex. As detailed in our policy report on gender identity, this view is divorced from biological fact and social reality, and does harm to children, particularly children struggling with their gender identity. The very ones Bill C-16 claims to protect are the most harmed by this legal shift.

Can I do anything?

You sure can! Our Senators are debating this bill right now. Click here to read more about it. Click here to find the phone numbers of Senators and a script to use when calling a Senator to express your concerns. And you can send one of these three EasyMail letters to contact your MP and the Senators representing your province.