“It is a rather audacious title for a conference – God & Government,” remarked Rev. Rob Schouten as he opened the inaugural BC God & Government.  Although the title did apparently cause some consternation for the BC Humanist Association, the approximately 55 attendees who took part in this event were edified by quality training that, when translated into action, will be a blessing to our governments and the broader public (including those who think they are better off when God and government do not mix in any way).

Not only was the title audacious, it was also a lofty goal to attract people who would be willing to give up a full spring Saturday to dig deeper into some challenging political topics that most people prefer to stay clear from.

The day-long event was organized by the two Fraser Valley ARPA chapters. Conference organizers included Matt VanderGaag and Levi Minderhoud. Levi has recently accepted the position of “BC Manager” for ARPA Canada and is set to officially start June 1st. Both Levi and Matt attended ARPA Canada’s signature God & Government conference in Ottawa last year. After seeing an Ontario ARPA group host a mini-version in their town following that, they wanted to do something similar in BC.

Levi was very encouraged by the outcome. “I received many comments about how the speakers not only spoke on subjects that are of concern to Reformed Christians, but also how each speaker brought a new and very useful perspective to that issue.” For example, “Tabitha Ewert took the decades-old topic of abortion and provided a fresh perspective on the need for parental consent laws. Paul Dirks demonstrated how we can staunchly oppose SOGI not only on biblical or moral grounds but also on empirical grounds.”

“People remained engaged and conversational throughout the entire event, regardless of whether it was during discussions after a speaker’s presentation, during the breaks, or during the mock and real meetings with MLAs.”

Levi was also impressed with the attendees. “People remained engaged and conversational throughout the entire event, regardless of whether it was during discussions after a speaker’s presentation, during the breaks, or during the mock and real meetings with MLAs.”

“It was also encouraging to see so many people from so many backgrounds and from so many different locations in BC. We had everyone from political veterans, such as school trustees from Chilliwack, to people who were just beginning to become interested in politics from Vancouver; we had teenagers still in middle schools to seniors enjoying their retirement; we had people from a variety of Reformed Churches across the province as well as from Catholic or non-denominational backgrounds. While we were primarily targeting Reformed Christians throughout BC, it was encouraging to see so many other people interested in the work of ARPA and eager to attend the conference.”

Rev. Schouten’s opening devotional included practical lessons that we can draw from the doctrine of the providence of God and apply to political engagement. He reminded us that the king’s heart is like a stream that God can channel (Proverbs 21:1), an assurance that all political developments are under God’s sovereign hand and care.

Tamara Jansen followed this by sharing her inspirational story of the work that was done by the Fraser Valley ARPA chapters in response to Fraser Health’s directive to force hospices to allow euthanasia and assisted suicide in their facilities.  Their successful events generated quality media attention and a lot of letter-writing, which all seems to have culminated in a positive change of course by Fraser Health.

Tabitha Ewert, legal counsel for We Need a Law, delivered a powerful talk about the consequences of current abortion laws and policies on women. Although done in the name of choice, she explained how one effect is that women are often forced to deal with a very distressing situation with little help and assistance. This is especially the case for teen girls, who can have an abortion without their parents even being aware.

Pastor Jason VanderHorst shared a brief lunchtime devotional, connecting to the theme of the providence of God and speaking more particularly to the institution of the family.

After a hearty lunch, the attendees were treated to a fascinating analysis of research about sexual orientation and gender identity by Paul Dirks. He drew from 500 studies on the topic, sharing surprising findings that even the secular academic community is beginning to come to terms with.

The delegates were then split into small groups and given an opportunity to practice meeting with government officials. ARPA’s hope is that all of the equipping will result in communication with MLAs on these issues well beyond the conference.

After an encouraging talk by a current MLA about “hope for social-conservatives,” the attendees were treated to small-group meetings with three Lower Mainland MLAs, providing an opportunity to learn first-hand about their experience as sitting government officials.

Levi was very pleased with the result of all the planning that went into the day. “The speakers conveyed information well and provided examples or suggestions for concrete action afterward. The breakout sessions also prompted attendees to think of how they could apply the information they just learned to real life. The conference did an excellent job of balancing the need for political knowledge and the need for political action. We wanted attendees to not only be hearers of the word, but doers as well.” 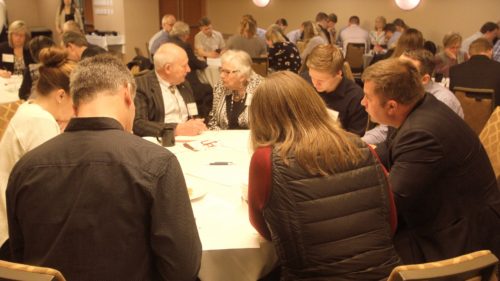