As Bill C-6 (Conversion Therapy) inches closer to its final debate in the House of Commons and its likely passage into law, Christians must equip themselves on how to speak biblically and winsomely about issues of gender and sexuality. In the words of 1 Peter 3:15, “always be prepared to make a defense to anyone who asks you for a reason for the hope that is in you; yet do it with gentleness and respect.” These conversations will not be limited to just political discussions. They will arise in our homes, in our schools, in our churches, and elsewhere in the public square.

We at ARPA Canada have endeavoured to equip you to speak to these issues with policy reports on gender identity and conversion therapy, talking points on conversion therapy, and a guide for how to craft school policies that will protect all students without specifically referencing gender identity or sexual orientation. But Christians must also develop well-rounded apologetics on these topics.

Although detailed apologetics on controversial issues are beyond ARPA’s mission, we would like to point you to some resources that you may find helpful if you’d like to go more in-depth. We encourage you to add any or all of the following books to your imminent reading list! 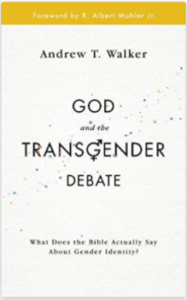 God and the Transgender Debate

God and the Transgender Debate is probably the best starting place to understand transgenderism from a Christian perspective. The book is easy to read, conversational, thoroughly biblical, full of love and grace, and can be read cover to cover in an afternoon.

The rationale for this book is simple: “The reason why Christians must confront the transgender revolution and why we must faithfully preach the gospel to transgender persons are because we love God, and we love our neighbor” (11).

In this book, Walker traces the acceptance of transgender identities back to relativism, the decline of Christianity, radical individualism, the sexual revolution, and Gnosticism and brings readers up to speed about the current language used by the world to describe gender (and sex).

Walker also searches Scripture to outline a biblical understanding of gender and gender identity, contemplates how Jesus would respond to a person identifying as transgender, and discusses how humanity’s sinful nature plays into this issue.

In the last half of the book, Walker writes about how Christians should respond to a growing acceptance of transgender identities. He focuses, as Christians should, on how Jesus is the “way, the truth, and the life” and how our identities should ultimately rest in Him. He acknowledges that there are no easy paths or shortcuts that can be taken when talking to a neighbour about their transgender identity or to a child about their gender dysphoria.

If you are looking for a book to help guide your casual conversations with a transgender neighbour or a child who is uncertain about their gender identity, this book is especially helpful. 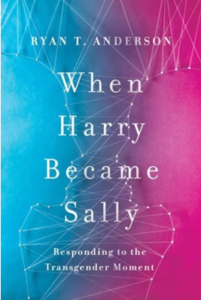 When Harry Became Sally belongs to a very different genre than God and the Transgender Debate. In this book, Anderson’s purpose is to warn those with gender dysphoria or a transgender identity against the perils of a chemical or surgical transition to another sex. “What’s at stake in the transgender movement is the human person,” he says (location 4367, Kindle edition). Anderson gives a comprehensive look at academic articles, medical trials, and the testimonies of experts and trans individuals themselves. If your goal is to convince your secular neighbour or persuade politicians to abandon their support of transgenderism based on secular evidence, this should be your go-to book.

In When Harry Became Sally, Anderson chronicles recent cultural and political developments in the United States that have led to a growing acceptance of transgender identities and samples the rhetoric and arguments used by those in the transgender movement. He also lays out the evidence for why sex reassignment surgery is an objectively poor medical practice and tells the stories of several individuals who have detransitioned. Also, by investigating where a transgender identity comes from, Anderson suggests the best ways to address gender dysphoria. Although aimed at a wide readership, Anderson pays particular attention to influencing the medial, political, and legal communities.

*Note: unlike the other books listed here, When Harry Became Sally is no longer available on Amazon. 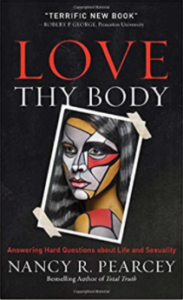 Love Thy Body is a book with variations of one central motif: that our modern culture has a dualistic worldview. On the one hand, our modern culture thinks that there is a private, subjective, relativistic truth based on values that are primarily found in morality or theology. On the other hand, there is a public, objective, universal truth based on facts and largely found in science.

Despite modern culture’s claim to be evidence-based, Pearcy accuses our culture of elevating subjective identities and desires over our tangible bodies. This fragmented worldview has led our modern culture to a deeply flawed understanding of anthropology, euthanasia, abortion, sex, sexual orientation, gender identity, and choice in general. The goal of Pearcy’s books is to encourage Christians and non-Christians alike to recognize and reject this dualism and, instead of disregarding the human body, to once again love the human body.

Although Love Thy Body deals with a variety of issues, Pearcy’s chapters on sexual orientation and gender identity are excellent explanations of how our modern culture prioritizes subjective identity and desire over objective biology. She traces how God created our bodies for a purpose and how sexual temptation does not need to define who we are or how we act. She also tackles the modern assumption that gender is a social construct and how gender stereotypes play into a Christian understanding of gender.

All in all, Love Thy Body examines the philosophical underpinnings of gender, sexuality, and a number of other issues. If you want a book that will make you think broadly about our modern culture’s approach to various issues, this is the book for you. 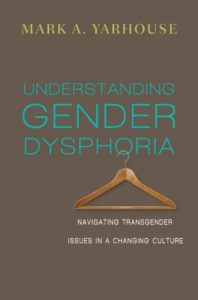 Unlike the authors above, Yarhouse is a clinical psychologist and published researcher who has extensive experience counseling children with gender dysphoria. His approach to the topic of gender identity thus comes more from a medical and counseling perspective than a theological or philosophical perspective.

The bulk of Understanding Gender Dysphoria describes and evaluates three ‘lenses’ through which to understand transgenderism and gender dysphoria. The integrity lens understands gender in terms of the sacred integrity of maleness and femaleness, unchangeably grounded in our biological sex. The disability lens focuses on the mental health dimensions of gender dysphoria and views transgenderism as a disorder of the mind. This diversity lens is the way most social progressives view transgenderism – they see a transgender identity as a good thing to be celebrated. Although Yarhouse argues that all three lenses have some degree of truth as well as misunderstanding to them, he proposes a fourth lens, the integrated lens, that incorporates the insights of the other three lenses. 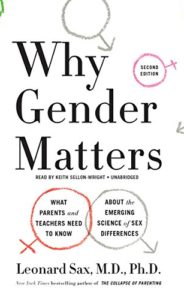 Dr. Sax, a family physician and psychologist, writes an entertaining and easy-to-read book that combs through all kinds of research that proves what we all already know: boys and girls are different. Dr. Sax rips apart two of the modern assumptions regarding gender: 1. that there are no differences between boys and girls 2. that we should try to eliminate any differences that do pop up.

He also shows how when this ideology is put into action, it is done so to the detriment of boys, particularly in their early years, and to the detriment of girls, particularly in teen years. The entire book is packed with references to many interesting findings and the heavy use of anecdotes makes for enjoyable reading. Chapter by chapter, he outlines major differences when it comes to the physical brain, the taking of risks, aggression, school, sex, drugs, discipline, and more.

Nevertheless, Why Gender Matters does have a few caveats. First, his chapter on LGBT issues and exceptions to the norms is a little confusing and might require re-reading to really understand what he was advocating for. Second, he uses too much evolutionary biology to justify his claims. Third, his chapter on sex is not suitable for children or young teenagers due to quite explicit content.

With those caveats, this book is appropriate for elementary and high school teachers, as well as any parents. It can open your eyes to how to more effectively engage, discipline, mentor, or raise boys and girls and how to make sure that the innate differences between boys and girls don’t become limitations. 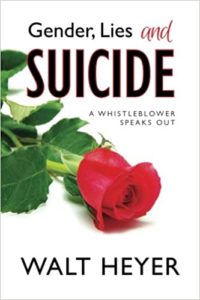 Gender, Lies, and Suicide: A Whistleblower Speaks Out

Walt Heyer was once a successful, married man with children. He lost it all after he decided he was really a woman, underwent surgery to alter his body to resemble a woman’s body, and lived as a woman for nearly a decade. Today Walt is living as a man once again and writing about the failures of the modern approach to transgendered issues and the uncritical embrace of so-called sex-change therapies.

Here he exposes the history of the transgendered movement, particularly the progression on the medical side. He attributes the high level of suicide in the transgendered community primarily to the failure of too many psychologists and doctors to dig deeper when a patient presents with a gender identity disorder.

This self-published title is not as polished as an edited book would be – at points Walt gets a little repetitive. However, it is still quite accessible and easy to read. It is also controversial, tackling an extremely sensitive subject. But for anyone who finds themselves on the other side of this issue, this book is a must-read. The author writes about the anguish, depression, and psychological and medical issues that afflicted him and so many other transsexuals, but all of which are not talked about for political reasons.

We hope that these books give you the understanding that you need to articulate a Christian perspective on the topics of gender and sexuality (particularly gender dysphoria and transgender identity) and love our neighbour, regardless of their sexual orientation or gender identity.